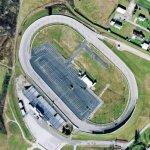 In 1967, new owners completely rebuilt the facility with a new half mile dirt oval that hosted sprint car and stock car races. In 1987, the track was paved, and has since hosted special events for NASCAR modifieds, Hooters Cup stock cars, and ASA stock cars, along with their weekly program.

The track owner closed the facility down in 2009 after failing to find a buyer. It sat unused until a new ownership group came forward in late 2013. Plans are to reopen in 2014 following repairs to the heavily vandalized structures.
Links: en.wikipedia.org
13,256 views