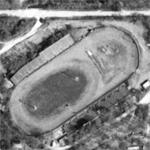 The track is not visible in Google Maps, but it can be seen in Google Earth's historical imagery (1993 and 1998).

From 1896 until the late 1920's, it was the site of the Santa Fe Park, a race track originally used for horses. The Santa Fe name came from the Santa Fe Railroad located alongside the property. Automobiles, motorcycles, and bicycles also eventually raced here. It closed after a tornado destroyed the grandstands.

The son of the original track owner built the Santa Fe Speedway after inheriting the land from his father. He created a facility with both a 7/16 mile and 1/4 mile ovals. It held its first race on May 31, 1953. At that time, this was a rural area, but it was eventually swallowed up by the expanding Chicago metro area.