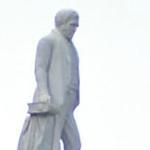 By Matheus_ @ 2011-11-10 11:54:04
@ 52.472077, -1.919033
Birmingham, United Kingdom (GB)
Joseph Sturge (1793 – 14 May 1859), son of a farmer in Gloucestershire, was an English Quaker, abolitionist and activist. He founded the British and Foreign Anti-Slavery Society (now Anti-Slavery International). He worked throughout his life in Radical political actions supporting pacifism, working-class rights, and the universal emancipation of slaves. In the late 1830s he published two books about the apprenticeship system in Jamaica, which helped persuade the British Parliament to adopt an earlier full emancipation date. In Jamaica, Sturge also helped found Free Villages with the Baptists, to provide living quarters for freed slaves; one was named "Sturge Town" in his memory.
Links: en.wikipedia.org
366 views

kjfitz
@ 2011-11-10 12:13:21
Please be sure to add the description with birth and death dates. See your earlier submissions that I fixed for examples.