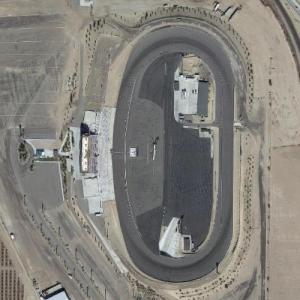 The project originally had the title of "Kern County's New Home to NASCAR", and eventually was coined "Kern River Raceway". It was to feature a progressively-banked 1/2 mile oval track with a 1/4 mile oval along the front stretch. A 1/8 mile drag strip was also planned for the site.

A short list of events for 2008 was announced the previous year, but work halted on the facility in April 2008 before the first event could be held. The property was sold in a foreclosure auction in June 2010.

UPDATE - The incomplete facility was left untouched until a group of local investors bought the track in 2012. The final tasks to complete the construction are underway, and the track has planned its grand opening on April 20, 2013.
Links: www.kernraceway.com
2,001 views