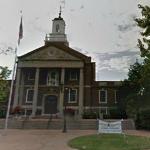 By kkeps @ 2012-07-20 13:19:39
@ 38.580163, -90.406383
Kirkwood, Missouri (MO), US
The Kirkwood City Council shooting occurred on February 7, 2008, in Kirkwood, Missouri, United States; a suburb of St. Louis, Missouri in St. Louis County. A gunman went on a shooting rampage at a public meeting in the city hall, leaving six people dead and two others injured. Charles Lee "Cookie" Thornton[1] shot one police officer with a revolver across the side street from city hall and took the officer's handgun before entering city hall. Thornton reached council chambers with these two weapons shortly after the meeting began. There, he shot a police officer, the public works director, two council members, the mayor, and a reporter. In total, the gunman killed five and wounded two others. He was then shot and killed by police.
Links: en.wikipedia.org, virtualglobetrotting.com
848 views