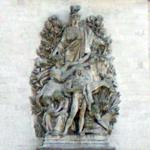 He first exhibited in the Paris Salon of 1833, his work including a reproduction in marble of his "Death of Hyacinthus", and the plaster cast of his "Cain and his race cursed by God". Adolphe Thiers, who was at this time minister of public works, now commissioned him to execute the two groups of "Peace" and "War", flanking the arch on the east facade of the Arc de Triomphe. This last, which established his reputation, he reproduced in marble in the salon of 1839.