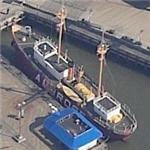 The Ambrose got her name from the Ambrose Channel, which marks the southern entrance to the harbor. She proudly served at this station until 1932, when a newer ship replaced her, but her service was not over. For a period, she served as a Relief ship off Sandy Hook and during the Second World War, the Ambrose spent her time as an Examination ship at Fort Hancock, New Jersey.

The Ambrose Light Station replaced the lightships in 1967. The US Coast Guard staffed this Texas type light platform until they automated the light in 1988.
Links: www.lighthousemuseum.org, en.wikipedia.org
1,057 views