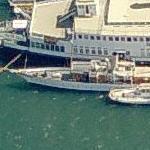 By kjfitz @ 2007-07-06 10:12:47
@ 32.721083, -117.173868
San Diego, California (CA), US
Named after a woman in Greek mythology, the Medea has a past almost as colorful as her namesake. Originally, the steam yacht was built for William Macalister Hall of Torrisdale Castle, Scotland, to be used for entertaining and hunting trips around the waterways in western Scotland.


She was completed on August 29, 1904, in a record building time of 51 days. Built of steel and furnished with imported teak and quarter-sawn oak, the Medea is an impressive and beautiful little boat. She has served in two world wars, under three navies and six national flags.

Launched on August 7, 1914, Pilot served as San Diego Bay’s official pilot boat for commercial ships entering and leaving the harbor for 82 years. Harbor pilots are responsible for steering large vessels safely into and out of the bay; the pilot boards the ship, takes command, and returns the vessel to the captain after it has docked or left the bay.
1,018 views