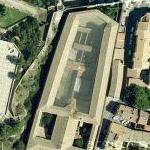 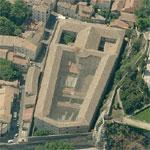 As part of its programme to sell off unused state property, France's finance ministry has put on sale the Sainte-Anne prison in the centre of the southern town of Avignon, one of the country's most popular tourist destinations.

Classified as a historic monument, the prison began life as an asylum in the 13th century -- around the same time that Avignon became the home of popes exiled from Rome. Up till 2003 it was a prison, and regarded as one of France's least salubrious.

"When the prison was closed the municipality wanted to buy it and convert it into a hotel. Sadly the price was too high," said Avignon's mayor Marie-Josee Roig.

Instead the rectangular three-story building around a central courtyard is open for bids. The only condition is that all or part must be turned into a top-class hotel with at least 110 rooms.

The ministry expects to obtain at least four million euros (5.9 million dollars). Several other disused prisons are to be sold off in the coming years.
Links: www.lemoniteur.fr
1,335 views