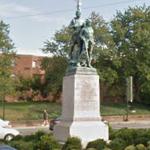 Meriwether Lewis (August 18, 1774 – October 11, 1809) was an American explorer, soldier, and public administrator, best known for his role as the leader of the Lewis and Clark Expedition also known as the Corps of Discovery, with William Clark. Their mission was to explore the territory of the Louisiana Purchase, establish trade and sovereignty over the natives near the Missouri River, and claim the Pacific Northwest and Oregon territory for the United States before European nations. They also collected scientific data, and information on indigenous nations.[1] President Thomas Jefferson appointed him Governor of Upper Louisiana in 1806.