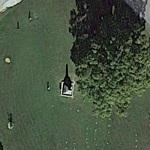 In 1809 Lewis intended to travel to Washington DC to resolve denied payments from the War Department that threatened to leave him in ruinous debt. On October 11, 1809 Lewis stopped on the Natchez Trace at an inn called Grinder's Stand 70 miles southwest of Nashville. That night gun shots were heard and Lewis was found with gun shots to the head and gut. The death is shrouded in mystery with conflicting reports from the inn keeper's wife. Was it murder or suicide?
Links: www.nps.gov, en.wikipedia.org
493 views