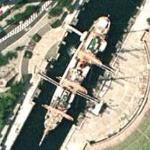 Although the former Nippon Maru had continued the brilliant voyage participating in ceremony of the 200th U.S. founding of the country anniversary (1976) etc., after 1974 with superannuation, it reduced the scale of ocean navigation and was continuing the temporary voyage.

1981, The investigation about construction of The Nippon Maru Ⅱ was started and the construction basic concept was summarized.

The fixed plans of construction was as follows.

* Fundamental engineering education etc. was taken into consideration based on The former Nippon Maru and The other sailing ship Kaiwo Maru.

* In consideration of years of operation, it had a fine sight as it was strong, and it considers as a dignified thing.

* While being equipped fully with educational equipment required for training adaptability, discipline, a sense of cooperation, and international mindeness that were indispensable elements for ship's officers.

* It took into consideration of a comfortable environment and living space on the ship in which people enable to live healthfully as much as possible.

1982, The budget about construction of The Nippon Maru Ⅱ was accepted, and it became progress of construction. The schedule from planning to complete the construction was as follows.

* 15th FEB. 1984 : Launching ceremony was celebrated in the presence of the Crown Prince and Princess.

* 16th SEPT. 1984 : Construction was completed and it was handed over. The first trainee was accepted and the maiden voyage was started.
Links: www.kit.hi-ho.ne.jp
935 views