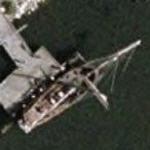 By kjfitz @ 2006-07-13 14:45:35
@ 41.817141, -71.396306
Providence, Rhode Island (RI), US
Continental Sloop Providence, based on the East Coast, in Rhode Island's Narragansett Bay. This 110 foot sloop is a recreation of a very historic Revolutionary War naval vessel. Originally known as the Katy and launched in the 1760's, she sailed the Eastern seaboard and the Caribbean as an armed merchant ship. It is believed that she may even have had experience as a whaler and perhaps even a privateer before the war began.

In June of 1775, she became the flagship of the navy of Rhode Island. When she became a part of the American Navy later that year, she was renamed the Providence and became the first command of John Paul Jones. In her career, she won over 40 naval battles – the most successful of all American ships in the war. Yet she met her end in 1779 when she was scuttled and burned by her crew to avoid capture by the British in the Penobscot River near Bucksport, Maine.

The Providence was one of several ships that sailed to the Caribbean for appearances in Pirates of the Caribbean – Dead Man's Chest. One of her crew, Richard "Rusty" Rice has a great diary online offering some views of her during the filming as well as a log her voyage there and back. From the ships web pages:

"The Providence appears in a number of scenes in "Dead Man's Chest". She is in the background as a British vessel in the harbor of Port Royal and as a pirate ship at the dock in Tortuga. Her best scene is as a merchant vessel from which Captain Jack Sparrow's hat is retrieved. The merchant ship then suffers the fate of being destroyed by a sea monster, the Kraken!"
Links: www.sloopprovidenceri.org
2,507 views