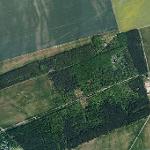 By Mike1989 @ 2013-11-18 02:59:30
@ 51.447963, 13.285432
Mühlberg, Germany (DE)
The NKVD Special Camp No. 1 (German: Speziallager Nr. 1 Mühlberg) was a special camp operated by the NKVD from 1945-1948, during the Soviet occupation of parts of Germany. It was located 4 km to the east of Mühlberg, Brandenburg using the shacks of the former German run prisoners-of-war camp Stalag IV-B. The prisoners mainly consisted of members of the lower and medium ranks of the Nazi party, German military personnel, youth wrongly accused of belonging to the Werwolf and other persons who were regarded by the Soviets as being potentially dangerous like journalists, teachers, policemen, farmers, factory owners and politicians in addition to a number of arbitrarily accused people. Conditions in the camp were characterized by bad sanitary conditions, malnutrition and lack of basic medical service. The camp had over 21,800 prisoners during its existence, including 1,490 women and over 1,300 teenager. At most, it held 12,000 prisoners at a time. In 1946, around 3,000 prisoners were deported to the Gulag in the Soviet Union. On 8 February 1947, further 1,000 prisoners, mostly youth, were also deported to an NKVD Gulag camp in Siberia, the NKVD Camp No. 7503/11 in Anschero-Sudschensk. In summer 1948, two thirds of the prisoners were released. On 17 September 1948, the remaining 3,000 prisoners were transferred to another NKVD camp, Special Camp No. 2 in Buchenwald. From there, a part was released in 1950, the remaining prisoners were handed over from the Soviets to the East German Communist government and brought to Waldheim on 9 and 13 February 1950, only to be "convicted" in the infamous Waldheim Processes. The camp in Mühlberg ceased operations in 1948.

More than 6,700 of the prisoners (among them 111 teenager) died due to the bad conditions in the camp. They were all buried in mass graves. Their relatives were not notified. The East German communist government forbade any commemoration. Only following the Fall of Communism in 1989, memorials were erected. In 1992, a central memorial was erected, which is rebuilt with the assistance of the German War Graves Commission. On 6 September 2008, a name plaque with the names of all the victims was officially unveiled.
Links: en.wikipedia.org
529 views