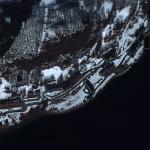 It's now been reported that Olavsvern is for sale for 105 million Norwegian kroner (17.5 million USD). NATO has said that the Norwegian government can sell the base as neither of them have a need for the base.
Links: theforeigner.no
7,457 views