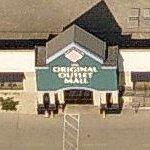 Opened in 1982. The northern half of the mall was demolished in 2005, with the few remaining stores relocated to the southern end. The mall closed it's doors in the summer of 2006 and demolition of the remaining part of the mall soon followed.

A large Ashley furniture store was built where the north end of this mall once stood.
Links: deadmalls.com
1,945 views