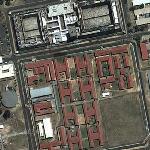 By Mike1989 @ 2013-08-25 08:55:53
@ -34.068987, 18.434479
Cape Town, South Africa (ZA)
Pollsmoor Prison, officially, Pollsmoor Maximum Security Prison is a prison in the Cape Town suburb of Tokai in South Africa. Nelson Mandela was the most famous inmate of the prison. He describes Pollsmoor Prison as "the truth of Oscar Wilde's haunting line about the tent of blue that prisoners call the sky.

Pollsmoor is a maximum security prison with little means in the way of escape. Some of South Africa's most dangerous criminals and roughest gangsters are held in Pollsmoor Prison. The prison has a staff of 1,278 and the capacity to accommodate 4,336 offenders, but the current inmate population is over 7,000 (a figure which fluctuates daily).

Marlene Lehnberg, known as The Scissor Murderess served her sentence in Pollsmoor but was paroled in 1986. Walter Sisulu and Ahmed Kathrada, both anti-apartheid activists, were also incarcerated at Pollsmoor. Alan Boesak served his prison term here after he was convicted of fraud in 2000.

In 2001 Pollsmoor prison was the subject of Clifford Bestall's BBC documentary, where they focussed on two soon-to-be-released prisoners, Erefan Jacobs and Mogamat Benjamin (then leader of the "28" gang), and followed their adapting into civilian life again after their release.