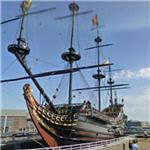 A replica with the same name was built at the Dutch shipyard Amels in Makkum for the Oranda Mura ("Holland Village") theme park in Nagasaki, Japan.

In 2004, the replica became part of the theme park Cape Holland in Den Helder, the Netherlands.

On the morning of 30 July 2009, the replica was lost to fire, probably due to an electric malfunction. The owner of the ship, the Libéma company, was to decide on a restoration.
Links: en.wikipedia.org
554 views