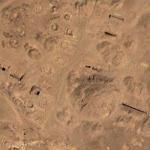 After taking control of most of Egypt, Piye set out for Heliopolis to worship the sun god and celebrate his coronation as king of Egypt. There we are told that he:

"...stood by himself alone. Breaking the seals of the bolts, opening the doors; viewing his father Re in the holy Pyramidion House; adorning the Morning Bark of Re and the Evening Bark of Amun."

Afterwards, he returned to Napata where he founded a Nubian dynasty, Egypt's 25th, that would last for about a century. Upon his death, he became the first Egyptian king in 800 years to be buried in a pyramid. He built it at el-Kurru, about thirteen kilometers downstream from the Temple of Amun at Gebel Barkal, and his was the first of an estimated 223 pyramids that would be built in Nubia over the next thousand or so years. We think that his palace may have been located nearby, though it has never been unearthed. Between 1918 and 1919, George Reisner conducted excavations at el-Kurru, but by then only one pyramid was still standing. He found Plan and Sectional of Piye's Tomb at el Kurruunder low mounds of rubble the tombs of Piye and his successors of the 25th Dynasty, Shebaka, Shebitku and Tantamani. Their tombs had once been covered by pyramids, but by the early 20th century, they had been entirely removed.

These pyramids bore much more in common with the private ones that can still be found on the West Bank at Thebes (modern Luxor) than with the Great Pyramids of northern Egypt, though it is commonly assumed that he was inspired by the latter. Even though the superstructure of his own tomb had been removed, its foundation trench indicated a pyramid with a base length of only about eight meters, and a slope of probably about 68 degrees. Nineteen steps led down from the east to the burial chamber that was cut into the bedrock as an open trench and covered with a corbelled masonry roof. Piye's body had been placed on a bed that rested in the middle of the chamber on a stone bench with its four corners cut away to receive the legs of the the bed, so that the bed platform lay directly on the bench. This was probably a Nubian custom, though fragments of canopic jars were discovered, leading Egyptologists to believe that he was most likely embalmed in Egyptian style. There were also the remains of Shabti figures, more typically found in Egyptian tombs. There had been a chapel built over and covering the stairway to the burial chamber, but it too was completely destroyed.

The pyramid of his successor, Shebaka, had a similar layout although the burial chamber was completely subterranean, and included a vaulted ceiling cut in the natural rock. Here, the entrance to the pyramid itself was built far enough to the east to allow it to be entered after the mortuary temple was built. A stairway led down to a short tunnel that than led into the burial chamber.

Along with the kings of the 25th Dynasty, there were also fourteen queens' pyramids built at el-Kurru, measuring between six and seven meters square, actually only slightly smaller than the kings' pyramids, which measured from eight to eleven meters square.

Reisner also found the graves of 24 horses and two dogs nearby. Four of the horses belonged to Piye, and four more to Tantamani. Scholars speculate that they may have each belonged to a chariot team. There were also ten horses belonging each to Shebaka and Shebitku. All of the animals had been sacrificially decapitated, and their skulls were missing. They were each buried in a standing position, and their bodies were draped with beaded nets hung with cowrie shells and heavy bronze beads. They also had silver collars and gilded sliver plume holders. There is also some speculation whether these horses might correspond with the boat burials of earlier pyramids.
Links: www.touregypt.net
1,981 views