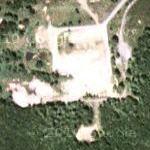 By Parabellum @ 2011-06-23 14:25:56
@ 41.221616, -78.236411
Frenchville, Pennsylvania (PA), US
In a December 8, 1953, speech to the United Nations, President Dwight D. Eisenhower announced a new Atoms for Peace policy, and the United States Congress enacted his program into law the following year. Atoms for Peace "made funding accessible to anyone who had the imagination, if not the ability, to harness the atom's power for peaceful purposes". Under the new program, the airplane manufacturer Curtiss-Wright Corporation sought a large isolated area in central Pennsylvania "for the development of nuclear-powered jet engines and to conduct research in nucleonics, metallurgy, ultrasonics, electronics, chemicals and plastics". Curtiss-Wright worked closely with the state and, in June 1955, George M. Leader, the Governor of Pennsylvania, signed legislation that authorized the construction of a research facility at Quehanna. The Commonwealth of Pennsylvania sold Curtiss-Wright 8,597 acres for $181,250 ($22.50 an acre), and gave the company a 99-year lease on the remaining 42,596 acres at $30,000 a year. Curtiss-Wright controlled 51,193 acres (80.0 sq mi) in a regular 16-sided polygon, which was easier to fence than a circular area.
Links: en.wikipedia.org
2,093 views

Anonymous
@ 2012-01-08 09:51:12
I grew up near Quehanna and actually attended school in Pine Glen, about 10 miles from the Quehanna site) where C-R built an entire community complete with elementary school and bomb shelters for their workers' families. Although the nature of the work at the site was secret, it was pretty clear that it wasn't totally "safe".

Of course another clue is the large stones (still there) along the road indicating how far one is from "Reactor Road" and potential danger. As I recall it was possible to drive through the C-R property but guarded gates were located at either end of the property and one had to stop, check in, and state the reason they wanted to drive through it....had we only known!

It's a bit eerie to think back on that time, the air raid drills, Cold War when we in rural Central PA thought we were safe from any chance of attack from America's enemies and there we were sitting practically on top of two (Penn State Unisersity is close by) potential targets.

Anonymous
@ 2019-08-23 21:23:55
My dad and his buddies had a hunting camp near there back in the 50s and 60s. I remember seeing gates and a fence and only knew that it was some Curtis-Wright facility if we drove a bit too far down one of the many dirt roads. The camp had a spring with the sweetest water I ever tasted. Went there as a kid. Sort of scary to find out what was actually going on there.