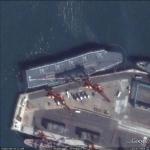 By McMaster_de @ 2010-03-07 21:06:06
@ 36.088675, 120.31303
Qingdao, China (CN)
The LPX project was the Republic of Korea Navy's new amphibious landing ship project for which Hanjin Heavy Industries has provided the general design package. The ROK Navy's requirements for the new amphibious landing ships were to enhance Korea's current amphibious operation capability, both in terms of assault and military operations other than war (MOOTW) type operations.

On 12 July 2005, ROKS Dokdo (LPH 6111), the lead ship of her class, was launched at the shipyard of Hanjin Heavy Industries & Constructions Co. in Busan. The ship was named after the Dokdo islets. She was commissioned into the ROK Navy on 3 July 2007.
Links: en.wikipedia.org
646 views