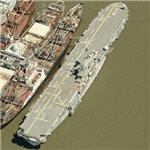 Involved in Viet Nam and the first Iraq operations. Also recovered Apollo 14 and was involved in recovery of Skylab 2 & 3 and Apollo-Soyuz.

Was the ship on which scenes from the movie Apollo 13 were filmed.
Links: en.wikipedia.org
2,507 views