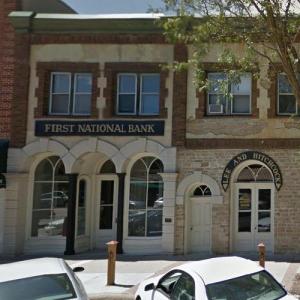 By BillHicks @ 2017-11-22 11:33:44
@ 44.4558216, -93.160179
Northfield, Minnesota (MN), US
September 07 1876 the James-Younger gang attempts to rob the First National Bank of Northfield, Minnesota. Unlike earlier targets the robbery did not go well. Two of the gang were killed and three Younger brothers badly injured. Minnesotan residents of Northfield were tipped off about the heist attempt and were ready. The raid also went badly inside the bank, as the head cashier successfully used stalling tactics. His bravery did not save him however as one of the enraged bandits shot him in the head and wounded another cashier before attempting an escape.

Some of the gang were killed in Northfield and others were pursued by a posse relentlessly. Four more killed or captured in the following days. Jesse and Frank James were the only two to escape largely uninjured. Frank was shot in the leg. They lay low in the woods of North Dakota until re-organising.

Their criminal careers were all but over. Frank accepted a pardon and quit crime. Jesse was shot in the back of the head whilst forming a new criminal gang. A quick and unexpected execution at point blank range. A large monetary reward for Jesse, was too tempting for the young hoodlum Robert Ford. Who became immortalised as 'the man who shot Jesse James'.
Links: www.history.com
652 views