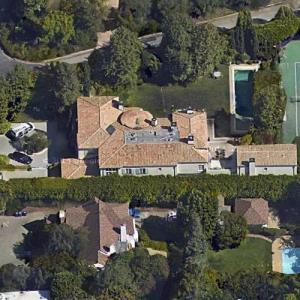 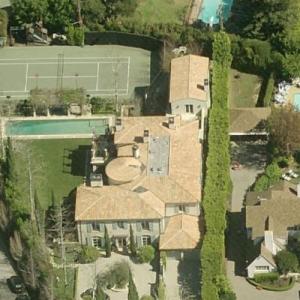 In 1994, OJ Simpson’s ex-wife Nicole Brown and her friend Ron Goldman, were found murdered at Nicole’s home. After the famous white Bronco chase, OJ was arrested and charged with their murders. After an internationally televised trial, OJ was acquitted of the murders. After serving 474 days in jail, he was freed and went to live at his house in Brentwood. OJ was found guilty by a civil jury and ordered to pay $33.5 million in damages to the victim’s families. He continues to maintain his innocence.

In 2007, OJ was arrested in Las Vegas and charged with multiple felonies, including armed robbery and kidnapping, related to stealing sports memorabilia. He was convicted in 2008 and sentenced to 33 years in prison. Currently serving time in Lovelock, Nevada, OJ is eligible for parole after nine years.

OJ lost his house to a bank foreclosure in 1997. OJ purchased the original house in 1977 for $655,000. The property was then a 6,200 square foot space featuring waterfalls, a tennis court, a swimming pool and guest quarters, made famous by OJ’s renter, Brian “Kato” Kaelin. The house was bought for $4 million and was bulldozed in 1998. A new house now sites on the lot.

The Brentwood, Calif., lot where O.J. Simpson's mansion once stood has been sold for $12.9 million, it was reported Sunday.

Nicole Brown Simpson and Ronald Goldman were stabbed to death at her nearby town house in 1994 and Simpson was forced to sell his property after their families were awarded $33.5 million in a wrongful death suit against him.

The property was bought by investment banker Kenneth Abdalla for about $4 million in 1997 and he razed the house and built a new one.

Universal Music Group President and CEO Zachary Horowitz is the new owner of the nine-bedroom, 10-bathroom home, the Times said. There are six fireplaces and a theater, wine cellar, indoor and outdoor living rooms, a guesthouse with a gym, a tennis court and a pool.