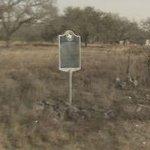 By WacoKidd110 @ 2011-10-04 19:00:41
@ 30.299216, -99.247879
Harper, Texas (TX), US
Marker Text:
Pioneer preacher Matthew Taylor and the families of his daughter and two sons moved here in 1863 from their homestead on the Llano River. They built a cabin on this site near the source of the Pedernales River. In August 1864, Matthew and his son Jim returned to the Llano for a load of hay, leaving in charge Eli McDonald, husband of Matthew's daughter Caroline. On August 8, 1864, at a nearby spring, Jim Taylor's wife Gill was surprised by a band of Kiowas and wounded by an arrow. Before she died, she warned the others, who took refuge in the cabin. After a brief fight, the Indians killed Eli McDonald. They captured his wife Caroline and daughters Mahala and Becky Jane; and Alice, James, and Dorcas, children of Matthew's son Zed. Matthew's wife "Aunt Hannah" escaped and hid in a cave in what is now Harper Community Park. Matthew and Jim Taylor discovered the tragedy the next day and sought help from Eli McDonald's nephew Monroe. The two victims of the massacre were buried near Spring Creek, twelve miles east of Harper. "Aunt Hannah" was found and reunited with her husband. the captives wandered as far north as Oklahoma with the Kiowa tribe before they were located and ransomed by the U.S. Government.
Links: wkcurrent.com
1,748 views