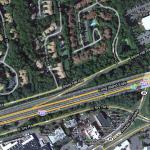 By mcgrathk @ 2010-12-20 18:36:38
@ 40.78252, -73.556653
Jericho, New York (NY), US
On Thursday, July 16, 1981, just after noon, Chapin was driving in the left lane on the Long Island Expressway at about 65 mph on the way to perform at a free concert scheduled for later that evening at Eisenhower Park in East Meadow, New York. Near exit 40 in Jericho he put on his emergency flashers, presumably because of either a mechanical or medical problem (possibly a heart attack). He then slowed to about 15 miles (24 km) per hour and veered into the center lane, nearly colliding with another car. He swerved left, then to the right again, ending up directly in the path of a tractor-trailer truck. The truck could not brake in time and rammed the rear of Chapin's blue 1975 Volkswagen Rabbit, rupturing the fuel tank by climbing its back and causing it to burst into flames.

The driver of the truck and a passerby were able to get Chapin out of the burning car through the window and by cutting the seat belts before the car was completely engulfed in flames. He was taken by police helicopter to a hospital, where ten doctors tried for 30 minutes to revive him.[citation needed] A spokesman for the Nassau County Medical Center said Chapin had suffered a heart attack and "died of cardiac arrest", but there was no way of knowing whether it occurred before or after the accident. In an interview years after his death, Chapin's daughter said "My dad didn't really sleep, and he ate badly and had a totally insane schedule."[4]
Even though Chapin was driving without a license, his driver's license having previously been revoked for a long string of traffic violations, his widow Sandy won a $12 million decision in a negligence lawsuit against Supermarkets General, the owners of the truck.
Links: en.wikipedia.org
8,118 views

Anonymous
@ 2017-07-24 04:36:29
Not exactly. He dies when his aorta was burst by a defect in the seat back. Also there was only one seat belt (his VW was configured with the first year of the VW passive restraint). He had no lap belt adding to the reason he ramped back up and over the seat back

Anonymous
@ 2019-06-22 23:09:12
I was 19 and driving a flat bed truck on the LIE that afternoon. Stuck in traffic for 4 hours without a/c, then slowly drove past the accident. One of worst I've ever seen.
Smoldering frame was all that was left of the car. I asked the toll collector if anyone had died and he said "the Cat in the Cradle guy".

RonPellet
@ 2021-04-02 12:11:45
So I’m finally out of traffic and the verses she took off to find the footlights I took off to find the sky were coming out of my mouth googled where exactly did Harry Chapin die on LIE got answer looked where I was right at exit 40 heading to rt 110 exit 49. Coincidence??? Maybe...he sure lived !!!