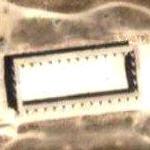 The unfinished hexastyle doric temple of Segesta, (late 5th century BC) is built on a hilltop just outside the ancient city of Segesta with a commanding view of the surrounding area. It is one of the best-preserved Greek temples, partly because of its isolation— there was never any temptation to dilapidate it for local building materials— and never desecrated because it had never been completed. It would be a peripteral temple if it had ever had an enclosed cella within it. But it was never roofed over, and its columns stand in the rough, waiting to be fluted.

It was built by the Elymian people, probably around 430-420 BC, but it was never completed.

It is a Doric temple of a peripteral type with 6×14 columns on a base measuring 21×56m and three steps high. The structure of the temple is intact with entablature and tympana in place, but it was clearly never finished. The columns are unfluted, the tabs used for lifting the blocks are still present on the base, and there are no traces of a cella or a roof.

The temple of Segesta is, in its construction, style, and size, a standard product for the late 5th century BC, but its unfinished state and its remarkable state of conservation makes it one of the most important surviving Hellenic temples in the world.

(I'm resubmitting the map after the original was deleted at original poster's request)
Links: en.wikipedia.org
1,013 views