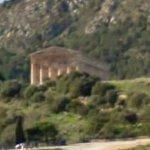 By WacoKidd110 @ 2013-05-16 14:22:49
@ 37.943128, 12.837872
Fermata Segesta, Italy (IT)
On a hill just outside the site of the ancient city of Segesta lies an unusually well preserved Doric temple. It was built sometime in the late 5th century BC and has six by fourteen columns on a base measuring 21 by 56 meters, on a platform three steps high. Several things suggest that the temple was never actually finished. The columns have not been fluted as they normally would have been in a Doric temple and there are still tabs present in the blocks of the base (used for lifting the blocks into place but then normally removed). It also lacks a cella and was never roofed over. The temple is also unusual for being a Hellenic temple in a city not mainly populated by Greeks.
Links: en.wikipedia.org, virtualglobetrotting.com
386 views