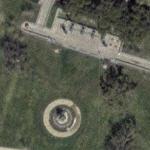 Today, this site is occupied by the Texas Vietnam War Memorial, a permanent monument to the 3,415 young Texans who were killed in the U.S. War with Vietnam during the 1960s and early 1970s. Like the larger memorial in Washington, D.C. this monument was built entirely with donations from the public. It consists of a series of upright granite slabs bearing the names of those who fell in the line of duty. It was dedicated in 1989 by President George Bush Sr. during a ceremony attended by hundreds of living Vietnam War veterans.
Links: www.watermelon-kid.com
728 views