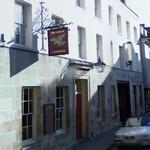 By Dania @ 2011-03-12 21:34:30
@ 52.203856, .117913
Cambridge, United Kingdom (GB)
Originally opened in 1667, as the ‘Eagle and Child’, The Eagle is one of the larger pubs in Cambridge, England, on the north side of Bene't Street in the centre of the city. The site is owned by Corpus Christi College and is managed by Greene King brewery. Apart from the main bar, it sports a beer garden and the so-called RAF bar, at the rear, with still-extant graffiti of World War II airmen covering the ceiling and walls.

When the university's Cavendish Laboratory was still at its old site at nearby Free School Lane the pub was a popular lunch destination for staff working there. Thus it became the place where Francis Crick interrupted patrons' lunchtime on 28 February 1953 to announce that he and James Watson had "discovered the secret of life" after they had come up with their proposal for the structure of DNA. The anecdote is related in Watson's book The Double Helix and commemorated on a blue plaque next to the entrance.
Links: en.wikipedia.org
939 views