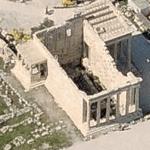 By adrbr @ 2008-02-09 04:51:21
@ 37.972465, 23.725764
Athens, Greece (GR)
The Erechtheum, Greek: Έρέχθειον Erechtheion. The temple as seen today was built between 421 and 407 BCE. Its architect may have been Mnesicles, and it derived its name from a shrine dedicated to the legendary Greek hero Erichthonius. Some have suggested that it may have been built in honour of the legendary king Erechtheus, who is said to have been buried nearby. Erechtheus and Erichthonius were often syncretized. It is believed to have been a replacement for an older temple destroyed by the Persians in 480 BCE.

The need to preserve multiple adjacent sacred precincts likely explains the complex design. The main structure consists of up to four compartments, the largest being the east cella, with an Ionic portico on its east end. Other current thinking would have the entire interior at the lower level and the East porch used for access to the great altar of Athena Polias via a balcony and stair and also as a public viewing platform.
1,869 views