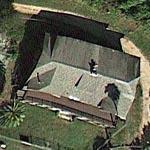 In the film, Lucy, played by actress, Diane Wiest, moves back into her father's Santa Cruz home with her two sons, Michael, (Patric) and Sam (Haim) shortly after moving in, all hell breaks lose when Michael becomes mixed up with a group of Vampires lead by Kiefer Sutherland.

To get a better view of the house, go to YouTube and type in "The Lost Boys (Grandpa's House)" for a video tour.
Links: www.imdb.com
8,392 views