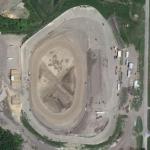 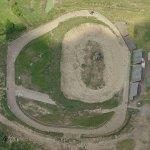 The 1/4 mile oval was paved in the early 70's. After the 2004 season, the pavement of the small oval was removed with plans to convert it back to dirt. The facility closed before that work was finished.

In 2009, the track was purchased at auction for $75,900 by Steve Puvalowski. He started over from scratch in building a 3/8 mile red clay oval track. The project was delayed after train tracks and remnants of a coal mine were discovered below the surface. The grandstands were moved to the west side to keep the sun and wind at the spectator's backs.

On June 17, 2011, the new track held it's first night of racing. Several classes of stock cars race here on Friday nights. A figure-8 track is planned to debut in August 2011.
Links: www.tricityracetrack.com
846 views