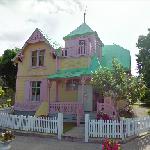 The house used during the TV series and some films with Inger Nilsson in the lead role was located in the town of Vibble on the island of Gotland in Sweden. Until the 1970s the house stood in a garden south of Visby, but it was re-located to Kneippbyn and Kneippbyns Summerland about three kilometres away from where it stood during filming of Pippi Longstocking, where it remains standing to this day. The garden where the filming of Pippi Longstocking took place and where Villa Villekulla stood can still be seen. Today there is a Scots Pine growing where Villa Villekulla once stood.
Links: en.wikipedia.org
3,215 views