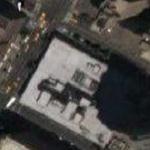 Also: "Here a lot of things happened to the "New York Four" I had to get this list from Greg Gattuso's book, The Seinfeld Universe. "Jerry and Kramer watch an operation and accidentally drop a [Junior Mint] into the patient's open body cavity. George finds a perfect parking spot only to have a suicide jumper land on his car. Kramer thinks he sees a genetically altered 'pigman' only to find out he is a pink, hairless car thief who makes off with George's damaged car. Jerry tries to cheer up his sick friend Fulton. Elaine goes for stiches after being bitten by a dog. Kramer promises a sick child that Yankee Paul O'Neill will hit two home runs for him in exchange for a birthday card signed by the Yankee organization. George tries to get Marisa Tomei's phone number from Elaine's ill friend." (from: http://home.earthlink.net/~asena/roosevelt.html)
1,904 views