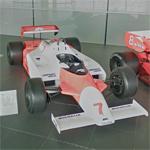 It was driven in 1981 by Northern Ireland's John Watson. He was victorious that year at the British Grand Prix at Silverstone, the second win in Watson's career.

The car was sponsored by Marlboro, but McLaren has removed the Marlboro brand from all of the cars in this museum.
Links: en.wikipedia.org
412 views