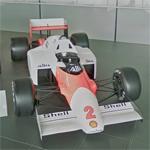 After losing the championship by half of a point the season before, Prost was not denied in this season. His five victories and eleven podium (top-3) finishes allowed him to cruise to an easy title over Italy's Michele Alboreto.

The car was sponsored by Marlboro, but McLaren has removed the Marlboro brand from all of the cars in this museum.
Links: en.wikipedia.org
550 views