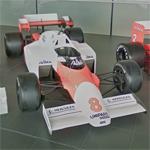 McLaren dominated that season by winning 12 of the 16 events. Lauda won five races, while his teammate, France's Alain Prost, won seven times. Lauda won the title by the narrowest margin in history, half of a point (half points were awarded at the shortened Monaco Grand Prix).

The car was sponsored by Marlboro, but McLaren has removed the Marlboro brand from all of the cars in this museum.
Links: en.wikipedia.org
532 views