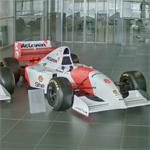 Senna won five races, including the final two of the season to earn second place in the points standings behind former teammate Alain Prost. Senna left McLaren after this season to race for Williams, filling the seat of the newly-retired Prost.

The car was sponsored by Marlboro, but McLaren has removed the Marlboro brand from all of the cars in this museum.
Links: en.wikipedia.org
663 views