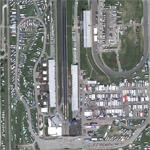 All of the race teams are in the pit area, but the weekday races do not sell many tickets. Thousands of race fans show up for the Friday-Monday races. The final day of the 2012 event was rained out (I was there), forcing it to be postponed until the following weekend.