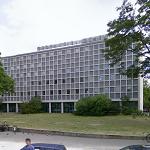 By GlobalPlayer @ 2011-02-13 04:01:57
@ 52.496965, 13.391456
Berlin, Germany (DE)
Amerika-Gedenkbibliothek (American Memorial Library) is one of the largest public libraries in Berlin, Germany. It was a donation from the United States after the Berlin Blockade, which took place in 1948/49. The building was designed by American and German architects, including Fritz Bornemann and Willy Kreuer. It was opened on September 17, 1954 and was originally planned to become the Central Library of Berlin. With the construction of the Berlin Wall and the separation of the German capital in 1962, this concept lapsed. On its 50th birthday, the library was honored for having been a symbol of freedom in times of political instability and the divided country.
Links: en.wikipedia.org
799 views