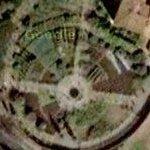 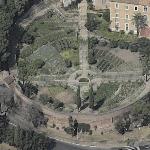 The monument measures 88m on its major axis and 75.8m on its minor one. The original structure was built on three levels of arcades, entirely in brickwork. The antique design could only be reconstructed before the pontificate of Paul IV (16th c.), when the amphitheater was returned to its original structure for defensive requirements.

The foundations of concrete mixture are now visible because the surrounding plain foundered.
Links: penelope.uchicago.edu
1,041 views