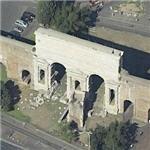 Through the gate ran two ancient roads: the Via Praenestina and the Via Labicana. The Via Prenestina was the eastern road to the ancient town of Praeneste (modern Palestrina). The Via Labicana (now called the Via Casilina) heads southeast from the city.

The original gate was built centuries before the wall in 52 by the emperor Claudius, and is formed by arches through two aqueducts, the Aqua Claudia and the Anio Novus. It was constructed as a monumental double archway built of white travertine. It contains inscriptions in praise of the emperors Claudius, Vespasian, and Titus for their work on the aqueducts. It was first known as the Porta Prenestina.

The gate was made part of the Aurelian Wall in 271 by the emperor Aurelian. It was modified further when the emperor Honorius augmented the walls in 405. The foundations of a guardhouse added by Honorius are still visible, while the upper part of the gate, as build by Honorius, has been moved to the left side of the Porta.
Links: en.wikipedia.org
1,125 views