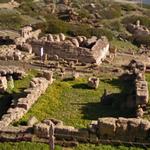 By adrbr @ 2011-07-13 09:39:16
@ 39.873534, 8.439864
San Giovanni di Sinis, Italy (IT)
Tharros (also spelled Tharras, Greek: Θάρρας, Ptol., Tarrae or Tarras) was an ancient city on the west coast of Sardinia, Italy, and is currently an archaeological site near the village of San Giovanni di Sinis, municipality of Cabras, in the Province of Oristano. It is located on the southern shores of the Sinis peninsula, that forms the northern cape of the Bay of Oristano, the cape of San Marco. Tharros, mentioned by Ptolemy and in the Itineraries, seems to have been one of the most important places on the island.
Links: en.wikipedia.org
747 views