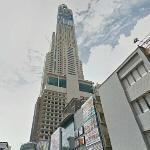 Ocean 1 Tower in Pattaya when completed, expected 2012, will be 367 m tall and so become Thailand's tallest building. It will also be the tallest all residential building in the world.