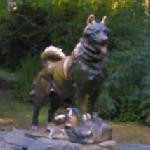 By Mike1989 @ 2013-05-29 10:21:13
@ 40.769967, -73.970941
New York, New York (NY), US
In January 1925, Alaskan doctors feared a deadly diphtheria epidemic would spread among the children of Nome. Medicine to stop the outbreak existed, but doctors needed to travel nearly a thousand miles to Anchorage to retrieve it. With no trains running that far north and the only available airplane sidelined by a frozen engine, the best chance of transporting the medicine across the icy tundra was by sled dog.

More than 20 sled teams coordinated to make the trip through blinding snow and sub-zero temperatures. On the first of February, the package was handed off to the final team. Lead by Balto, the team covered 53 treacherous miles back to Nome in 20 hours. Newspapers and radio around the world followed the trek, fascinated by the brave team whose efforts eventually helped end the epidemic.

Balto became a national hero. Just 10 months after the successful mission, this statue by animal sculptor Frederick G. R. Roth was dedicated in Central Park. The sculpture depicts Balto surveying the distance, hind legs braced and a sled harness hanging from his back.

Balto spent many happy years in the Cleveland Zoo, but his statue remains a favorite for children and adults here in Central Park.
Links: www.centralparknyc.org
684 views