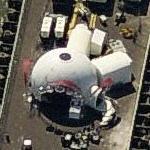 By kjfitz @ 2008-07-15 16:51:55
@ 40.741625, -74.011324
New York, New York (NY), US
Band in a Bubble is a round-the-clock live broadcast, during which a band spends an extended period of time inside a "bubble" writing and recording an album. The Band in a Bubble concept was the creation of Paul Curtis, band manager, tour promoter, owner of Valve Records and visual artist based in Australia. The concept was developed in conjunction with Regurgitator and XYZ Networks.

Endemol's first staging of the Band in the Bubble took place in New York City featuring pop-punk band Cartel. The show was developed in a partnership with MTV, Dr Pepper, and Epic Records, the band's label. The show launched on May 24, 2007.

The bubble is set up at Hudson River Park's Pier 54. As in the first instance, fans can stop by the bubble and watch the band through the building's windows. Twenty-three webcams have been set up around the bubble, which can be viewed via MTV.com and www.drpepperbubble.com. MTV is also broadcasting four half-hour specials. During the series, Cartel is recording the follow-up to their 2005 album Chroma.

The bubble was created using 55,000 pounds of steel truss and quarter-inch-thick fireproof rigid fiberglass. The bubble contains a two-thousand-square-foot recording studio, as well as a kitchen, dining room, lounge area, and bathroom. The band's sleeping area is on the top level, which is held nine feet in the air with airplane hanger cables.
Links: en.wikipedia.org
659 views