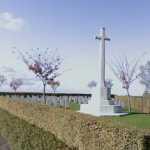 There are now 177, 1914-18 war casualties commemorated in this site. Of these, a small number are unidentified.
Links: en.wikipedia.org, www.cwgc.org
625 views