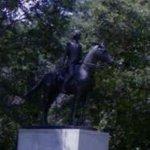 Gálvez aided the Thirteen Colonies in their quest for independence and led the Spanish armies against Britain in the Revolutionary War, defeating the British at Pensacola and reconquering Florida for Spain. He spent the last two years of his life as viceroy, succeeding his father Matías de Gálvez y Gallardo, who had been viceroy before him. Galveston, Texas and several other places are named for him.
Links: en.wikipedia.org
509 views