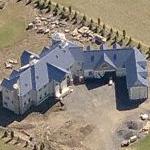 By Turneasterne @ 2012-01-06 09:35:01
@ 42.85929799, -76.39694747
Skaneateles, New York (NY), US
On July22, 2011, federal prosecutors seized the distinctive blue-roofed Skaneateles mansion that they say was built with drug money dating from the 1980s. Assistant U.S. Attorney Steven Clymer said Charles Ludwig Blomquist III, 52, a Skaneateles resident with a history of drug and money-laundering convictions, spent $1.7 million in cash to build the home. Charles Blomquist and his ex-wife, Dorothea Wied Blomquist, were the listed owners of the property from 1994 to 2004, according to court papers. Then he put ownership in his daughter’s name, Christie Blomquist of Westport, CT, to conceal his involvement, the papers said.

This 5,996 square foot lakefront home has 3 bedrooms and 3.5 bathrooms on 3.2 acres of land overlooking Skaneateles Lake in the Finger Lakes region of New York. The current assessed value of the home is $1,424,600. The home was built in 2003, and the construction process is present in images. The Skaneateles mansion is assessed at $1.4 million. The two-story, three-bedroom house has a pool, tennis court, boathouse, fireplace, covered porches and an acre on the lakefront, according to the property records.

People in diners and bars were struck by its gaudiness, started calling it “the castle” and speculated about the guy who’d built it, said Charles Major, the former town supervisor. “People long suspected drug money,” Major said. Shortly after construction began, Blomquist built a berm along the road, then planted trees on it, blocking the view of the lake of his neighbor across the street, Major said. Blomquist later cut down trees along the lakeshore, loosening the soil and causing mud to pour into the lake, Major said. That, together with the home’s appearance and the fact that no one lived in it, created a buzz, he said.

Blomquist pleaded guilty on Friday, July 22, 2011 in federal court to conspiracy to commit money-laundering, failure to report foreign bank accounts and tax fraud. He admitted he’d built the home and put money into a Swiss bank account with criminal profits, but he would not concede that the money was from drug-dealing. Neither he nor his lawyer would comment on the criminal activity. Clymer said the home and the foreign bank account, which once held more than $1 million, were the result of selling cocaine and marijuana starting in the 1980s. As part of his guilty plea, Blomquist agreed to forfeit his interest in the home. The federal government plans to take possession of it, Clymer said. Blomquist and federal prosecutors agreed he would be sentenced to 87 months in prison, which must be approved by U.S. District Judge Norman Mordue. Sentencing was on November 22, 2011.
Links: www.syracuse.com
1,942 views

Turneasterne
@ 2012-01-06 09:39:19
The following links provide a significant amount of detail on the case as well as additional photographs of the property: